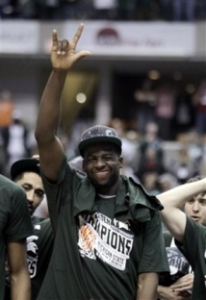 Draymond Green is coming off a big time senior year for Michigan State, one in which he was a consensus All-American and Big 10 Conference Player of the Year. Green also put himself in rare air as far as stastical measurements in the power 6 NCAA Conferences, as he became the first player to average over 15 points, 10 rebounds and 3 assists since Tim Duncan’s senior year at Wake Forest. His college success is impressive, 107 wins, 2 Final Four appearances and a conference title during his Spartan days. Still, people wonder where the 6’7 and 235 pound Green will fit in the NBA.

Green is somewhat of a 3/4 hybrid, gaining comparisons to numerous undersized 4’s with varying success. Draymond seemed to be a winner and a player who improved greatly over time, but the tweener label makes it difficult to project his role on a NBA team. He was able to be a successful point forward at times on the college level, but the NBA would expect him to play off of the ball and more than likely defend guys with more size and greater athleticism than Draymond may possess. Despite these odds, Green still is up for the challenge.

According to Green, he is being projected to go anywhere from 20-30, obviously a first round pick being his goal and supposed window. He has a workout scheduled with Boston, who seem to be in his range with possession of the 21st and 22nd pick. Draymond also has accepted an invite to the Chicago Pre-Draft camp and is expecting to workout for close to a dozen other interested teams.

“I’m not going to worry about getting tired because I’ve been grinding my whole life,” he said. “Some teams are going to bring me in as a 3 and some as a 4 to see how I deal with quickness or length. I’m sure I’ll be going against some 6-10 guys and some shorter and quick guys.”

Green also has an answer for those wondering about where he will fit on a team.

“If teams ask me if I think I’m a power or a small forward my answer is going to be, ‘I’m a player.’ I don’t want to be classified, I just want a chance to play.”

These seems to be perfect answers and a great attitude, though it still of course leaves many questioning whether to take a gamble. This is a deep draft in PF depth, not to mention PF is one of the more deep positions in the league. Even if Green is classified as a combo forward, there seem to be many of those available in the draft. Seems like this senior might have the resume and references to carve out a position in the first round.

While there are taller players and probably those with more upside, attitude is incredibly important. You are applying for a job in the NBA, professionalism can give you a major leg up. Tom Izzo gives a glowing reference to Green as a potential roster employee.

“My biggest point is and will be, Draymond is one of the few guys that has gotten better every year — from his shooting to ball handling to his body — and he’ll keep doing that because of his work ethic,” Izzo said. “The guy is a winner in much the same way that Magic (Johnson) and Mateen (Cleaves) were here and no one is ever going to have a problem with him off the court.”

Magic Johnson and Mateen Cleaves were pretty much as close as one could get to polar opposites of NBA success. Still, Izzo provides a point that might be on the minds of teams looking for a player of Green’s stature and skill set. Are we getting a professional who will buy in to what our team stands for? So far, seems like Green is doing well for himself in that regard. For those players one might think have more prototypical size and athleticism for a particular NBA position, it takes more than that to be a NBA player. Green being “a player” might be enough justification for him to end up as a first round pick on June 28.

Related Players:
Draymond Green
Follow Michael on twitter @NBADraftMikeyV or feel free to send him an e-mail at michaellvisenberg@gmail.com