Talent was not the issue for this year’s version of Team USA in the Hoop Summit. While the World Team’s size might have been hard to overcome, the Americans had some similar issues to last year’s squad with regard to lack of team play. Also, the World Team having athleticism equal to or greater than Team USA put a major hitch in the full court press that has been effective in stifling opponents in past Hoop Summit contests.

The hope is that the 112-98 loss, the second in as many years, will be a wake up call for Team USA, that just outclassing their opponents will not get the job done. Nearly all of these players should make at least some kind of impact at the college level next season. Many have a lot to improve upon before taking their game to the next level. In the end, this was a more talented group than 2012, but not enough to overcome the organization and chemistry of the World Select team. This game showed that future participants will need to work hard to play as a team and develop the same type of chemistry that the World team has displayed the past two years. One comforting thought is there will be no Andrew Wiggins on future World teams. 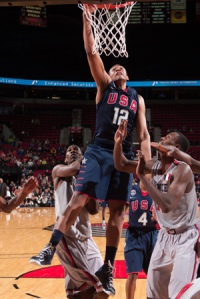 With a polished offensive skill set, Parker had a very solid couple days of practice and played as hard as anyone during the game. He has a great basketball IQ, a beautiful jump shot as well as ball skills incredibly rare for a player his size. Measuring at 6-8 with a 7-0 wingspan, Parker should be a major mismatch at Duke and a legitimate future NBA franchise level talent.

While he did not score in the first quarter of the game and appeared to have some jitters, Parker finished with 22 points, 7 rebounds and had some plays displaying a skill level way beyond his 18 years. He shot 1-9 from long range, though it would be surprising if he did not shoot really well at the college level from deep. He could definitely stand to get more toned, which may help his overall lateral quickness. Overall, Parker certainly looked like the best prospect on Team USA and deserves the title of best player out of the HS Class of 2013 “not named Andrew Wiggins”.

His bounce and energy are evident during drills and Gordon displayed it during practices as well as scrimmages in bursts. This game exposed many things he needs to work on before becoming a SF, the position he aspires to play at Arizona next season. Gordon is somewhat of a short strider with a game that does not really move too far outside of the key.

This was a mostly unforgettable performance for Gordon, who scored the USA’s first basket but then had few and far between. He finished with 9 points, yet only a single rebound for a USA squad that was out boarded 50-35. Gordon measured very similar to Julius Randle, even slightly longer with a higher standing reach. However, he is still only 212 lbs and one may wonder how putting on needed weight may effect his quickness. Without major improvement in his outside game and his dribbling in tight space, it is hard to see him as anything but a 4 at the pro level. Gordon is the youngest player on Team USA at only 17, just has a long way to go as far as showing he is the high level pro prospect many have declared him as in the HS basketball community. Despite tremendous leaping ability and length, Gordon is a tweener who should focus on staying in college a few seasons to work on his game.

Proclaimed as the PG of the Harrison twin duo, Andrew has solid size even for a 2 guard. He also has solid shooting mechanics, with a wrist snap that seemed to bring shots off even cleaner than his shooting guard brother. Finishing with 19 points and a team leading 5 assists, while making 10-12 FT’s, Andrew still sometimes forced the action. He plays dangerously at times and is not necessarily a traditional pass first PG. A definite step up from Kentucky’s PG situation last year, just no guarantee he ends up in the upper echelon of those coached by Calipari. How much he’s willing to absorb coaching at Kentucky and play a team game will determine how high he’s able to go if he stays on the one and done train, as expected.

This was more than likely a forgettable week for the “other” Harrison twin, something that he should use as motivation towards improvement. He needs to work on his court vision, as double teams gave him serious issues. His shot selection in both practice games and the game left a lot to be desired. These twins are very talented, though some felt they could use a bit of humbling, and the response from scouts will hopefully do just that. At this point both brothers games are much better suited to disorganized ball than an organizing setting and a rude awakening could be in order at Kentucky. Lets hope this will be a key turning point for these talented brothers. 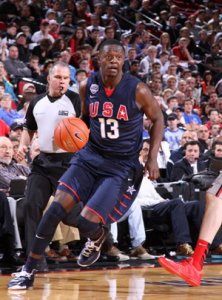 It was obviously not optimal for Randle to play center and the World Team’s size definitely seemed to bother him. At 6-9 and 250 lbs, Randle most definitely packs a punch and has solid speed to take players off the dribble. His back-to-the-basket game needs work, while it is hard to see him at any other position than PF at the pro level.

An issue that could develop with Randle is having less than ideal length. His 6-11 wingspan was pretty evident when he tried to lay it up over the long centers of the World Team, as well as when he played against centers in practice. Randle also sometimes has a tendency to over dribble. He’s far too infatuated with facing up and he has not developed a post game. He definitely possesses talent as a rebounder and some court vision.

Randle said one of the reasons he signed with Kentucky was John Calipari being the only coach that brought up his weaknesses. Well, he has a golden opportunity to work on them and should be the go-to player for Kentucky, with a higher skill set than any of Kentucky’s 2012 recruits. His strength is elite right now and he looks destined to be a lottery pick next season as long as he puts in the necessary work at UK.

The clear team leader in practices, Hill did enough to get the nod as starting PG for the team. Only a few months younger than World Team starting PG, Hill was far outplayed by pro seasoned Dennis Schroeder. He fouled out of the contest in less than 18 minutes; Hill displayed toughness and some explosive ability that should make Gators fans happy. His lack of strength will probably make it difficult for him to be a “one-and-done”. He has some outside shooting ability and vision that should make others around him better while catching scouts attention.

A revelation during the game for a Team USA that needed energy, Rondae showed some definite upside being a top wing defender. Measuring a 7-1 wingspan, he showed ability to guard multiple positions and was by far the best perimeter defender on the team. He also seemed to attack the offensive glass, with 5 of his 6 rebounds in the game coming on that side of the floor. His jump shot could use some work, though he is a great slasher and seems to know his strengths. Jefferson likely spends about 3 seasons at Arizona before he shows readiness to play a role of slasher/stopper in a NBA rotation down the line.

Jackson needed to play major minutes for Team USA before fouling out in around 25 minutes. He displays some athleticism and a willingness to play defense, though he had a hard time creating for his teammates. Notre Dame will likely be a nice chance to learn from some seasoned veterans at guard and he should immediately get some PT as a freshman. Nonetheless, Jackson looks like a 4-year college player who needs work on his all-around offensive game and to establish his ability as an on-ball defender.

The post-season All-Star games may not have been an ideal platform for the long, talented Vonleh. He finished with no points, a single assist and rebound in less than 10 minutes. The physical tools are tantalizing, measuring close to 6-10 with a 7-4 wingspan, as well as displaying some ball skills and even some ability to stretch the floor. He has quite a bit of work to do and seems to have a hard time developing his identity or being a primary offensive option. Vonleh may not be an All-Star game guy, and way need than a year in college to polish his game. But with his length and skill set, the NBA should be part of his fairly immediate future.

Portis is a finesse 4 who has the size to even play the 5 spot at the college level. Measuring at 6-11, though likely an inch shorter, Portis showed some nice ability to run and plays much more of a face-up game. His shot has a slightly low release and while he may be able to put the ball on the floor at the HS level, the SEC could be a big wake-up call. He looks like an immediate impact player for Arkansas, though he also looks like a player who will need time in college to develop the skill set necessary to make him an attractive draft prospect.

Despite consecutive losses, the USA retains a 10-6 lead in the all-time Hoop Summit series. This team played hard and one might hope they take this game as a learning experience. The International game may be slightly different to the one many USA players were used to, though it should not be a major excuse. Once again another great year at the Hoop Summit, with the USA hopefully paying some attention to detail with more of a focus on team oriented basketball.