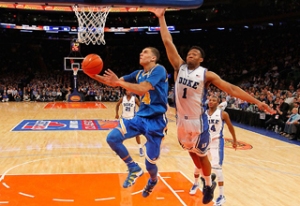 Whatever team takes Zach LaVine will be risking quite a bit on an “upside” player who had an up and down freshman season. He did not have the typical season most “one-and-done” freshmen put up before heading to the NBA Draft and had a forgettable final five games of the season. So, why is he the top SG prospect for the 2014 Draft? Well, like the team that ends up picking him, it is based on projection. He is an absolutely freakish athlete, finishing at the top in the lane agility drill at the Draft Combine and near the top in every other run/jump aspect. His size, ball handling and potential as a shooter also work in his favor when factoring in the long term. In a draft that seems to be short on star power at the SG position, LaVine is a shoot for the moon type of prospect who could pay huge dividends. Drafting LaVine will require patience as he’ll likely need some time to become a contributor, he must add strength and also gain consistency and skill. While there is inherent risk in choosing LaVine, the pay-off could be well worth it if he manages to put it all together.

Tough and cerebral, Harris is probably the closest you get to a sure thing amongst the SG prospects. He was a major contributor for Michigan St. these past two seasons, making noticeable strides during this past season. The toughness was present in his fighting through injuries with his shoulder, wrist and ankles. Even so, it brings to light that he has had to deal with these injuries quite a bit in his young career. Harris even withheld from athleticism testing due to a minor ailment. In his workouts since, he seems to have shaken the injuries off and has reportedly shot quite well. His shooting, ball handling and unselfish play all exemplify a player who seems to be wise beyond his 19-years, though he must improve his decision making in isolation. Lack of ideal size and injury concerns are both things to think about when projecting Harris to the NBA. His maturity and the professional attitude he brings should make him a staple in a teams rotation sooner rather than later, with a chance to be a very serviceable starter.

As a freshman on Michigan’s NCAA Tournament runner-up squad, Stauskas was a knock down shooter who teams always had to take into account. His sophomore season, after adding strength and working on becoming more explosive, he became one of the top players in the nation and wa the player of the year in the Big Ten. Nik thrived in his role as go-to offensive option, making plays for his teammates, showing much more aggression when attacking the basket and, of course, still maintaining his deadly outside shooting efficiency. There is definitely a role for Stauskas at the next level thanks to his shooting. The question will surround just how much he can add to his all-around game. The added athleticism of NBA SGs could prove to be challenging for Stauskas, particularly on the defensive end. Even with the obvious work ethic he displayed at Michigan, it will be an adjustment at the next level. What he does bring is accuracy and an ability to create that not many shooters possess, as well as a knowledge of the game that should end up being valuable in the right situation.

After a heavily scrutinized season for a UK team that had high expectations, the group still ended up making a pretty competitive run while finishing just short of the 2014 NCAA title. Freshman wing James Young was a bright spot, though he also went through his share of inconsistency. He has excellent physical tools for the wing and is a streaky shooter who can make you pay for giving him open looks. Too often Young settled for the shot instead of using his size and athleticism to his advantage going to the basket. Scouts also complain that his feel for the game and decision making were weaknesses. There is still a lot to work on and it will probably take him some time to get acclimated to the NBA. His upside is there with solid physical tools and talent, it will likely require the right set of circumstances for him to realize his abilities.

Wilcox certainly possesses tools you see in good NBA shooting guards. He has solid size, athleticism and is a shooter you must account for on the perimeter. He is already 23-years old, which probably limits his upside, though it also means he is probably more ready to come in and contribute. Playing a strong role for Washington for the last three seasons, Wilcox never developed completely into a star. What he did do was play solid position defense and put in a lot of work on his outside shooting. He is a calming presence who should thrive as a role player as opposed to taking on primary scoring duties. His shooting is what stands out the most and he should thrive coming off of screens as a catch-and-shoot type player. He could become a knockdown shooter, so even if the potential is not through the roof, there is some definite intrigue present.

Adams was an incredibly consistent scoring threat for UCLA who also made his presence felt in other areas of the stat sheet. As a sophomore, he showed improvement in his outside shooting, was a more aggressive rebounder and he still possessed the great instincts on defense that netted him 2.6 spg. The mental game certainly seems to be on his side, he works hard, knows the right places to be on the floor and makes very few mistakes. Even with all of these positives, his athleticism scores at the NBA Combine were well below average for the SG position. While these athletcism test scores are not necessarily death sentence for a prospect, they raise major concerns regarding just how well Adams will translate facing bigger and faster players on a nightly basis. Adams toughest games came against top competition and it will not get easier. Adams is a gamer and knows how to play. The bottom line is, his lack of run and jump athleticism limits his potential, but there is enough to like about his game for teams to consider him with a late 1st round pick.

Brown tied at the top in both standing and maximum vertical at the 2014 Draft Combine. He has world class bounce. What he lacks is size, particularly evident in his being around 185 lbs even after a 4-year run at Oklahoma St. It seems that he will always be fairly slight, which may give him fits when guarding most NBA level SG’s. What he does provide is the jump out the gym athleticism, along with quickness that made him a solid college defender. He is a decent shooter who can slash and he showed a willingness to work on the glass at a solid level. The NBA will still be a definite transition and he would struggle creating off of the bounce, most of his offense was set for him as opposed to being created by him. Brown is a high level athlete who has more to his game than meets the eye, though he may have a difficult time getting established right away and will need further work on different aspects of his skill set in order to earn minutes.

This past season has been huge for Bogdanovic, as he was handed the reins to KK Partizan and played at a very high level consistently throughout the season. Bogdanovic has good size at 6’6, armed with good court vision and a willingness to play both ends of the floor. He also has scoring ability to bring to the table, though he can stand to work on both his mid-range and outside shooting. His play this season earned rave reviews and made him a relative lock to be chosen, and possibly even in the late first. He’s a potential contributor who can help you across the statsheet on offense. Playing 54 pro games this season should go a long way in easing the transition to the next level. While he is not a top shelf athlete and may struggle defensively against NBA athleticism, his play this past season at the professional level should give him a chance to stick on a roster across the pond.

Hairston began this past season hoping to play his junior year at North Carolina, after a couple of off-season issues put his eligibility in jeopardy. After sitting out the first 10 games of the season, the program decided against reinstating Hairston and led to his joining the Texas Legends of the NBA Development League. Once he was with the Legends, Hairston displayed the scoring acumen that had him regarded as a possibly lottery pick in early 2014 mock drafts. He is a very strong guard with long arms, who showed potential as a shooter and made teams pay at the line. His off-court issues still weigh into where he is ranked, though it seems his time in the D-League was positive and gave him a preview of what is to be expected at the professional level. Averaging 21.8 ppg in his time with Texas is encouraging. The NBA is still a different ball game and it has yet to really have a star drafted from the NBDL ranks. Perhaps Hairston can change that.

The steadying force for a high level Arizona team this season, Johnson garnered accolades and made some positive tweaks to his game. He showed leadership, was a streaky hot shooter at times and he can definitely get up with an over 40-inch vertical. It is still hard not to call Johnson a “tweener” at the next level, as he lacks ideal size for a SG and has done little to show he can run a team at the point. His overall efficiency was not really out of this world and his placement on All-American teams had in large part to do with being the best player on a great team as opposed to being individually dominant. Nonetheless, when you are drafted where Johnson is likely to be taken, fitting into a system and knowing your role is important. As are work ethic and a competitive nature. From a family with basketball acumen (his father, Joey, was a playground legend and his uncle, Dennis, was a Hall-of-Fame player and MVP of the 1979 NBA Finals), Johnson has fantastic mentors and rare insight into what it takes to succeed as a basketball professional.